A History of Live UMaine Mascots 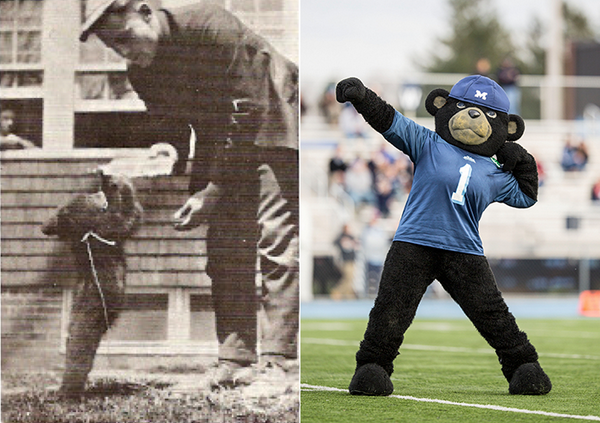 As beloved as Bananas the bear is today – by students and faculty alike – he was not always UMaine’s mascot. Below is a bulleted history of the University of Maine’s various animal representatives.

– 1903: The University of Maine adopts an elephant previously used to advertise a nearby store as its first mascot, which would come to be named Bolivar.

– 1914: A live black bear cub named Jeff is brought to a UMaine football game, which is said to have made the crowd “go bananas”

– 1915: A former Track and Cross-Country captain introduces a new bear, named Bananas by Maine Track coach Adam Smith, who becomes his trainer and takes him to every Maine sports game. Bananas is a national hit and leads the Maine sports teams to several championship victories.

– 1916: Bananas II is another hit, and the crowd loves watching her “box” and wrestle with her trainer.

– 1920: Bananas III is beloved by Maine students for her various quirks. She was on the ‘interviewed’ by reporters, and even had a role in several movies! Two years later she fell deathly ill, and when all was said and done, was stuffed and put on display in the Memorial Gymnasium

– 1923: Bananas VI sees the Maine football team to an impressive comeback against Bowdoin college, sending the school’s own mascot, a white husky, running, according to his handler.

– ~1924-1925: Bananas VII, sometimes referred to as “Queen Bananas”, is donated to the school as a weak, sickly cub, and is nursed to health before resuming the tradition of attending Maine sporting events, sitting regally on the sidelines.

– 1927: After the passing of the last mascot, the University goes through several mascots, many passing on for various reasons

– 1966: The last live Maine Black Bear mascot, Cindy Bananas, dies of pneumonia, and shortly after, the use of live animal mascots in Maine is outlawed. After which the University began using Bananas costumes, a tradition that continues today.